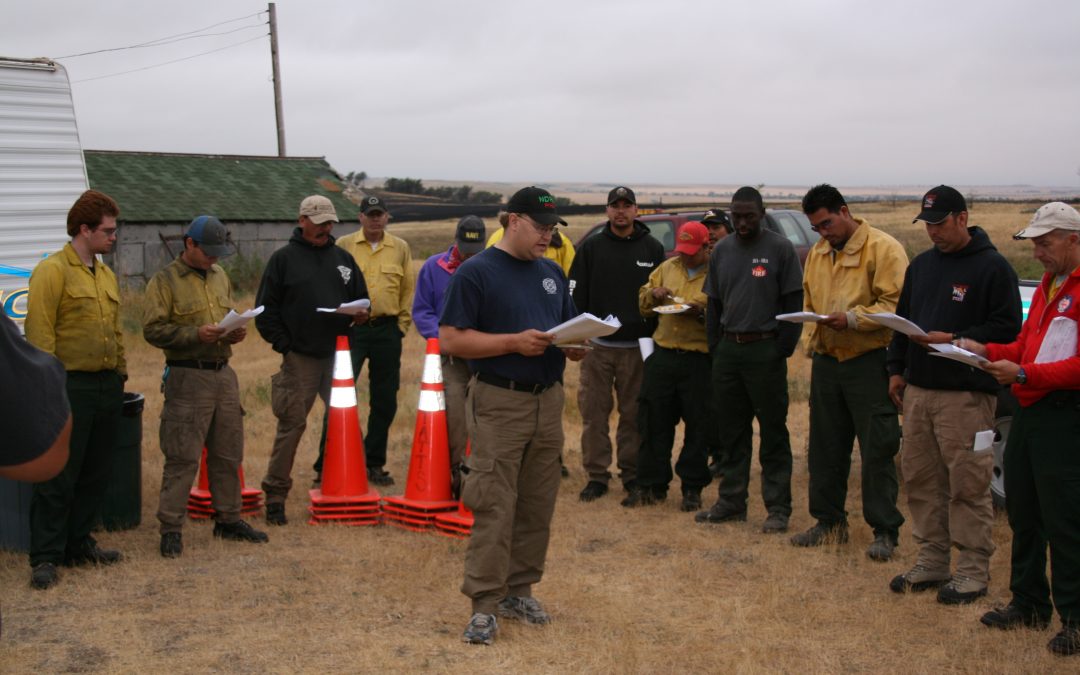 As a father and husband it’s amazing how fast time flies. My oldest is playing his second year of college football and we’re down to one kid left who needs to get their drivers license. Your entire life you hear folks talk about how you need to appreciate the little things while they happen, because life goes so fast and at the age of 44 I’d have to agree.

However, a couple of years back on Friday, May 26, 2017, I also learned how much life can stand still when things don’t go right. You see, it’s been almost 15 years ago that I hopped on a type 6 wildland engine as a volunteer firefighter and never came home for 33 days and would be in and out of a wheelchair for 3 years because of the burn-over I was involved with on April 8, 2005. On Friday, May 26, 2017, 12 years and 48 days after I got hurt, I walked the ground I got hurt on for the first time with a group of young firefighters who were getting ready for the 2017 season. Although the cosmetic look of the ground has changed, what I saw that day was just as real as if I were living it all over again and no time had ever passed. A lot has happened over the last 15 years and God has granted me opportunities I never would’ve dreamt of having before my accident. This is the story of what I’ve learned, but maybe more importantly it’s a story of what others have not yet learned.

The morning of April 8, 2005, I woke up as a happy father and husband who was running a small business that was successful enough to pay the bills, put food on our table and allow us to live a comfortable and fulfilling life. When the pager went off sometime after 12 o’clock that afternoon I, like many individuals in small town America, became a firefighter out of a sense of duty and responsibility to the community that I lived in. Just like every other volunteer that I know, that day I was not looking for a paycheck. And like many volunteers, a simple thank you from those in the community is almost more than we’re willing to accept. What I didn’t know when I left the fire hall is that night I would be in surgery, a fellow firefighter would be fighting for his own life and our fire department and community would never be the same.

I tell my story wherever I can so that firefighters across the country never have to go through what I did. There are a lot of lessons to be learned from my burn-over. Almost all of them are simple and easy to implement at the local level whether you are a volunteer, full-time, or wildland firefighter. But the story that needs to be told louder and with more urgency is the lessons that our agencies, associations, state governments and federal government refused to learn. The thing that is most frustrating and painful to deal with 15 years after I got hurt, is watching other firefighters and other first responders suffering from the same emotional and financial injuries inflicted by those who are supposed to advocate on our behalf. As I told my story to these young firefighters that are just getting started in life and their fire careers, I pray they take everything I say to heart so that they never have to learn any of these lessons the way I did.

On the day that I got hurt we were fighting a pretty standard spring grass fire in North Dakota in full bunker gear and the accepted training of the department at the time. After several hours of fighting the fire a group of three engines were sent to start a pump n’ roll operation at what I was told was an anchor point. I was on the first engine that was engaging the fire that consisted of one to 3 foot flame lengths. Most people that were there said that the wind shifted and the flame grew in size as conditions became hotter and drier. The fire engine that was 15 seconds behind us was fine when the fire blew out of the hole nestled in the prairie, my engine however was in the right place to take a direct hit from a wall of 2500° plus temps followed by a wall of flames. I fell and lay unconscious next to the firetruck that day, sustaining a broken right ankle and 3rd degree burns on my left foot, while the sweat in my turnout gear boiled, giving me steam burns on much of the right side of my body. I was wearing a brand-new SCBA that day that our department had received from a grant and that is the only reason I’m alive today to write this article. My PPE kept me alive that day and for that I am grateful. But nearly a year later I had the opportunity to take the 130/190 Basic Wildland training and my heart sunk. You see the things that I learned in that class would’ve kept me from ever getting hurt in the first place. There were nearly 14 of 18 watch-outs present and learning the most basic fire behavior it was clear to see that I should never have been where I was when I got hurt. Another mistake that I made the day  I got hurt was tunnel vision. I was so focused on doing my job, trusting all those around me and all of the gear that they had given me that I felt invincible.

The hardest lesson to learn from that day however had nothing to do with fighting fire but had everything to do with the phrase, “if you get hurt you’ll be taken care of”. I took everybody at their word that they meant what they said. I, like almost every other firefighter and first responder that’s been hurt, learned that this statement is made with a lot of fine print, written and unwritten exceptions. And that does not even include digging into the red tape that no injured person nor their family has the time or energy to figure out.

At the end of the day on April 8, 2005, I didn’t know it yet, but I would get evicted from my home, lose my business, lose the ability to enjoy the outdoors with my kids the way I was used to, lose the ability to do physical labor as I had in the past and so much more that I prefer not even talk about. Now that I’ve worked as a full-time firefighter, Prevention Specialist and Plans Chief for the State of North Dakota and currently part of a Type 2 incident management team and have been part of a volunteer fire department, these are the things I have learned over the last 15 years that we as a fire community need to talk about and together work on solutions starting at the local level. I’m not pointing fingers here, but just stating the realities that I was unaware of before I got hurt.

1. A vast majority of communities are not equipped to handle the fallout and needed support when one or more of their own is injured in the line of duty.

2. Legislators are unwilling to look at volunteers as a necessary resource that need support.

3. Some associations would rather protect their funding than the first responders they are chartered to speak on behalf of.

4. State and federal agencies are underfunded to provide adequate resources for responders to continue to do their jobs, day in and day out. This includes fighting for the financial resources to be properly equipped and staffed along with the counseling resources needed when doing their fire fighting job.

5. Once an injured responder is out of the hospital they are on their own.

6. Responders injured in the line of duty struggle with failure and guilt.

7. We are still injuring and losing responders to protect property that can be replaced or land that will be better off because of fire.

8. Decisions with life-and-death consequences are routinely made by individuals and committees that have never walked the fire ground.

9. Those who’ve been injured and those who knew the lost are rarely invited to tell their stories when decisions are made by associations, state and federal agencies and government.

11. Injured responders repeatedly have to prove that they are not cheating the system.

12. Associations, agencies, state and federal government talk about safety, PTSD and suicide prevention but do not provide necessary services and are usually the cause of many of these issues.

A couple of days after I had the opportunity to talk to the young firefighters where I was injured, I was trying to process everything I am writing in this article, I watched a documentary on the 1910 fire in the Northern Rockies. The sad reality of the lessons I listed here is that they are almost identical to the struggles that Edward Pulaski championed until his death in 1931. That’s 109 years with no change.

The reason that I am where I am today with my loving family is because of organizations like the Wildland Firefighters Foundation, Healing Patriots, fire departments and other individuals. They have, in spite of the lessons I’ve listed, answered the call to take care of those who put it all on the line and their families. Before I got hurt, I didn’t even know that they existed. After I got hurt, they took care of me and my family and for that I am grateful. The family of responders in the United States is always there for each other when days like April 8, 2005, happen.

I write this article so that we as a fire community, both structure and wildland, keep in perspective what matters. We need to better inform ourselves and new volunteers of the risks on the fire ground and the risk to our families when the bad thing happens. We need to get involved in the needed conversations at all levels and stop accepting reasons not to act but together find solutions that work.