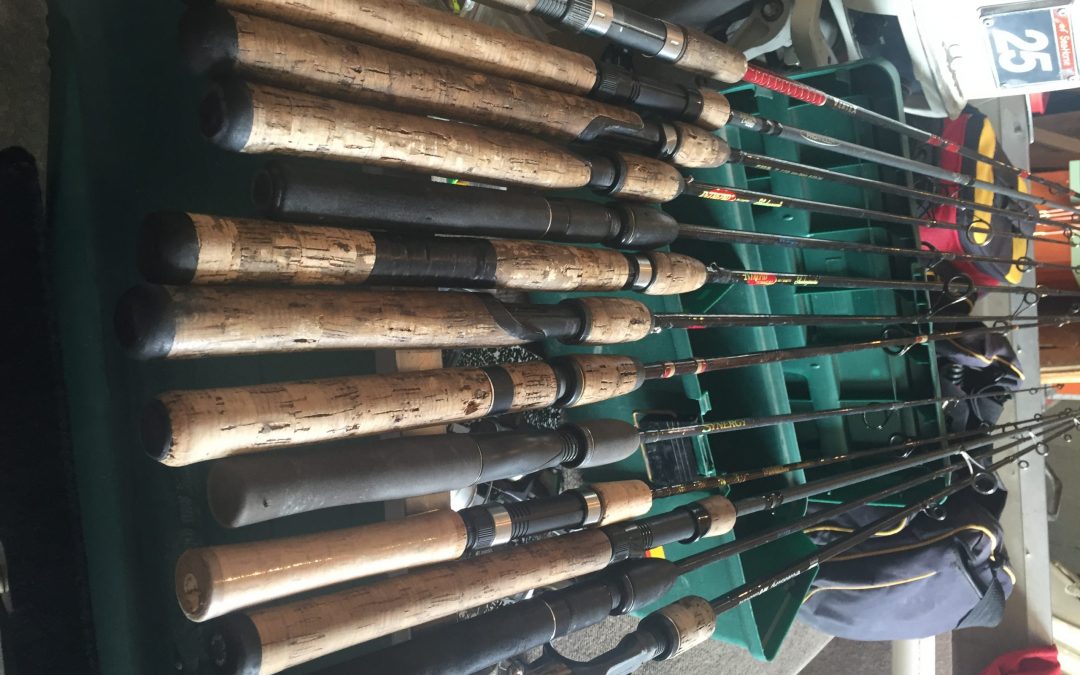 A very memorable fishing story for me, is the day we stopped by to do go shore fishing with some friends. Everyone seemed to be catching fish but that one poor guy with the bad luck. You know the guy who couldn’t net a fish in a trout pond at a sport show. I went over to see if I could help him out and hopefully end this poor guys night with a little dignity and confidence. My first question was, “what to you have on” He replied, “let me show you” and proceeds to reel up his line. It took him about 3 seconds, yep 3 seconds. He maybe had 8’-12’ of line out max. I said “well there’s your problem, just cast a little farther out and you’ll be on the fish”. It was then that I saw the funniest, most dangerous and admittedly somewhat intriguing casting technique I have ever seen, with total distance of at least 6’ and now I knew the problem. This poor guy was fishing with not only the wrong rod, no one ever taught him how to cast. Over the next half hour or so I worked with him to get a cast good enough to catch fish. Mission accomplished.

The trouble with this story is you can place most kids learning how to fish in this guy’s shoes for all the same reasons he was struggling, wrong rod. When you’re teaching someone how to fish there are a few things to consider when picking out a rod that fits their abilities. Not matching the rod to the angler usually leads to disappointment, frustration and in this poor guy’s case…no fish

First things first. The rod this guy was using was a super flimsy, rap it in circles rod. A rod with a slow action and light power are harder for kids to break and are usually cheaper, so many new anglers start with this kind of rod. Like the guy in our story found out, they can be very difficult to cast. My rule of thumb for action is to start with a fast action rod that is medium/heavy power and see how it fits in the angler’s hands. Have them go through some basic casting motions and see how the rod bends. What I am looking for is a rod stiff enough that the rod does the work and it’s soft enough that they aren’t snapping the line or throwing bait off when they cast. What you will find most of the time is that a new angler learns to cast faster, with better accuracy than they would with a flimsy rod.

Next question to answer is what’s the right length rod. Most people have the fond, cute memory with kids and short beginner rods. Now think back to watching them try to fish with them. Hooks fling everywhere and adults are having to cast for safety sake. Casting with a short rod is hard. If you don’t believe me, here is a fun experiment. Pull out some panfish ice rods and have an accuracy competition with the family in the backyard. I like to start out with a rod that is 1’-1.5’ taller than the angler until the angler is 5’ tall. For most kids, the mechanics work out best with the weight and size of the rod and their arm length. An additional benefit is that the hooks on the line are usually far enough away that you don’t need to become proficient at hook removal.

When it come to reels there is a little more to consider. The old stand by spin casting reel that most anglers grew up with are most peoples first thought. But, as we have been talking about in this series, you need to look at the capabilities and limitations of each young angler as your starting point. The common thought is that spin casting reels are easiest to learn. Most spin casting reels are big and bulky, making it hard for kids with smaller hands to cast and reel. Small spinning reels on the other hand are easer for these kids to hold. Another thing to consider are line twist, tangles and drag when picking out a beginners reel. What I have found is, dollar-for-dollar and time-for-time, spinning reels are the better option because of durability. The reality is that everyone is different, meaning they all learn in different ways and times. This means that you need to spend a little time with each angler to make a decision, and when it comes to reel choice, expect some trial and error.

Let’s talk a little bit about price. There’s a whole lot more that needs to go into figuring out how much you’re going to spend on a rod and reel than budget. When you consider what we’ve talked about already, it doesn’t matter how much you spend on the rod and reel, if it doesn’t fit the angler it was a waste of money. And another thing to consider is how much you are willing to spend when the tip is broken or the reel no longer works, because it was drug through the sand and all of the other incredibly hard things kids do to rods and reels during the learning process. I don’t have any hard numbers, but the rule of thumb that I use is this, I want to spend as much money as necessary to get a rod and reel that is durable enough for at least one fishing season. After all, kids grow and probably won’t fit anyways next year. On the flip side of the coin, I don’t want to spend enough money that makes me angry when the rod and/or reel is broken. There’s nothing more tragic than watching a kid hate fishing because of getting chewed out because a rod was broke during the learning process. Remember the goal is each time out, new anglers have a positive outdoor experience. Spending the right amount of money on a rod and reel has more to do with this than most people think.

Exception to the rule: everything that we have talked about so far has to do with what it takes to pick out a rod and reel for a kid to learn how to cast and catch fish effectively on their own at any age. But when it comes to new anglers, especially little ones, my favorite rod and reel combos are a 6 1/2’ to 7’ rod with a bait casting reel in the boat and a spinning reel on the shore. What I like about this option is small kids can reel while leaving the rod in the rod holder. When you’re shore fishing they can sit on the ground and just reel and in the boat they can stand and reel. This is a great way to get them started with the basic hand-eye coordination needed to take the next step to getting their own rod and reel and casting on their own.

Finally you need to get some fishing line on the new reel. When it comes to new anglers, I’m a big fan of cheap monofilament. I generally go with a 6 to 10 pound test depending on what species we’re targeting. What’s nice about mono is that it breaks easily when you need it to, while being less likely to cut their hands while pulling on snags. It is also less expensive to replace when big tangles happen and trust me they will happen, regardless of what reel you’re using. Another nice thing about mono is it’s easy for kids to learn how to tie their knots with and you don’t need any special tools to cut it.

So as you are hitting the sporting good stores this spring, keep in mind what your young angler’s capabilities are and what it takes to have a positive outdoor experience when you’re picking out their new rod.

Next month’s “Raising an Angler” article will be “Map Reading”. I will cover in greater detail how and why to use the different mapping options out there to put you and your young angler on fish.